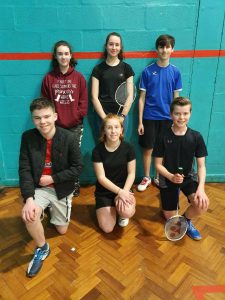 The Under 17 team consisted of Max Gilbert, Luke Hughes, Tomos Tustain, Adam Griffiths, Will Winfield, Hannah Harrison, Megan Blackburn and Grace Evans with all playing superbly to go on and win 9 – 7. Will Winfield, Grace Evans and Cathal Johnson starred, putting in particularly strong performances, each winning all their three matches.

In the League’s latest tables to the 29 February Division 1 is still headed by, as yet, undefeated Eros on 91 points, closely followed by Flint Phoenix A on 89.

Flint Phoenix A reinforced their determination to challenge for the top position with a resounding 8 – 0 win away over Mold B. At fourth mixed for Mold, Dan Roberts and Lili Thomas came closest to a home win when they took David Carnelly and Jude Hughes to three games before losing out by 21/15, 11/21 and 13/21.

Mold’s A team however went one better when they entertained Deeside and with the visitors handicapped by being a lady short, applied the 8 – 0 whitewash. Deeside’s Ashley Oxborough and Gareth Thomas put up serious resistance in their top men’s doubles against Ton Peace and Pete Walker just losing out by 21/19, 11/21 and 20/22.

Flint Phoenix B sit on top of Division 2 with 94 points with Buckley in second position on 89.

Flint Phoenix B showed their strength in depth when they demolished Llanferres B 8 -0. Only at fourth mixed did Flint’s Alfie Moorcroft and Holly Gill not win in two straight games when they were taken to the decider by Ben Garnett and Moira Bonar before clinching the match by 18/21, 21/12 and 21/16.

The clash between second placed Buckley and third placed Llangollen proved to be a highly competitive match with little to choose between the two teams and the result was a fair 4 – 4 draw. Event of the evening was at second ladies which saw Buckley’s Alison Ince and Chris Dailey take a hard earned match against Jo Drummett and Zoe Pritchard by 17/21, 21/19 and 21/18.

In Division 3 Connah’s Quay look certainties for promotion with 97 points along with Holywell A on 91.

The Quay cleared up at Llanferres D when they put the home team to the sword winning 8 – 0. At second mixed Sian Elias and Kris Paterson had to work hard in a long three game thriller to eventually edge out Martyn Davies and Pauline Brooke – Rankin by 18/21, 23/21 and 21/15.

Confusion over names on the score sheet didn’t prevent Mold C from securing a comfortable 8 – 0 win over bottom club Holywell B. Match of the evening was at third mixed which saw Eve Ellis and rising star James Maddocks play impressively to take their event with Hilary Roberts and John Speed by 18/21, 21/17 and 21/17.